Today, JTEP is accessed in more than 50 countries, by researchers, practitioners, consultants, local authority and government personnel, investment financiers, teachers and students. JTEP is available as a fully browseable, searchable electronic journal, with images and text reproduced as an online e-book.

To obtain on-line access, the subscribers are requested to register first with Inter-Media Marketing, then with Ingenta when the membership number is received. The details are given below...

Register at Ingenta Connect for free. Get an all-inclusive & cost-effective package. Search and browse JTEP 2001 to present articles.

Register at JSTOR for free. Enjoy many benefits including free read-online access JTEP 1967 to most recent 3 years. 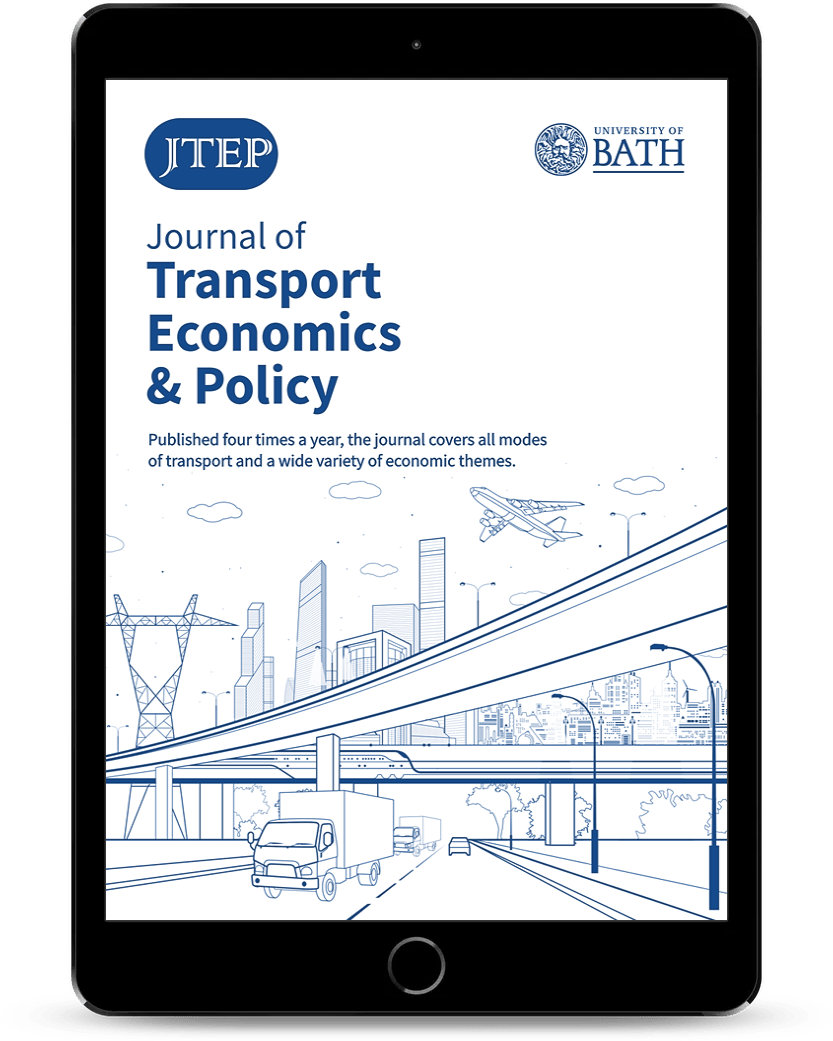 The Journal of transport Economics and Policy acknowledges with thanks permission to use the text of “Thirty Years of Classified Abstracts” compiled and edited by David Starkie.

Until 1967, when JTEP was first launched, transport economics papers were disseminated through a variety of publications including the mainstream economic journals such as the Economic Journal, Economica and the American Economic Review. The more applied pieces found their way into journals such as the Bulletin of the Oxford University Institute of Statistics, Land Economics and the Journal of Industrial Economics; into professional journals such as those of the American Eno Foundation, the then Institute of transport, and the Royal Society of Arts; or into that vehicle, which has now all but disappeared, reviews of economic issues published by the main clearing banks. More than thirty years on, the mainstream academic journals continue to publish transport related paper and, as belies a competitive world, even for journals, emulation has produced direct competitors for JTEP. But, JTEP still holds centre stage as a source of rigorous thought and analysis on the economics of transport and its interface with transport policy.

A characteristic of JTEP since its inception has been to publish an abstract of each paper and these abstracts provide an invaluable entry point into the wealth of material over the years. The following compilation draws upon this rich vein of knowledge by bringing together almost 600 abstracts of papers published in JTEP between 1967 and 1996, using a classification system created for this purpose. Although there exist a number of classification systems such as that used by the Journal of Economic Literature or by the UK transport Research Laboratory, these have their limitations. JEL’s system, although comprehensive with respect to the economics discipline as a whole, is too broad when the focus is upon transport. trL’s classified database, by contrast, is focused, but essentially on surface transport.

The classification used here classifies material by transport theme (rail, road, shipping, etc.); and by economic subject (costs, demand, economies of scale, etc.). These two categories divide the book into two parts. Most abstracts are in both parts and, thus, appear at least twice. And, some abstracts appear several times, simply because the paper to which they relate is multi-faceted.

Many abstracts were easily classified (because the papers to which they relate were sharply focused on a particular issue) but a large number were not. The economics section posed particular difficulties. Papers with an economic orientation frequently cover a number of economic concepts and a paper on, say, (marginal) cost will invariably invoke pricing issues and, possibly as well, issues of scale and productivity. But, to scatter the abstract too freely between classes reduces the utility of the classification system; there is an issue of balance to consider. Therefore, when addressing the economic dimension, I have classified an abstract according to its chief economic theme(s) and eschewed the more incidental, parenthetical or consequential references to related issues.

The reader may, occasionally, feel that an abstract has been totally misclassified: the title of the paper to which the abstract relates apparently suggesting it should have been placed elsewhere. But, on closer examination, it will be evident that the title belies the content. The rejoinder, published in May 1979, commenting on an earlier paper: “Airports - an Economic Survey” is a case in point. The comment was concerned solely with the valuation of travel time, which happens to be one of the subject classes in the economic section wherein the rejoinder was placed.

Over the years the character of the abstracts has changed. For the first 11 years there was a brief abstract of each paper forming part of the Contents Page of each issue. This was supplemented in January 1978 by a lengthier abstract (also translated into French, German and Spanish), placed at the back of each issue. Thirteen years later, a further change took place when, in September 1990, the shorter Contents Page abstracts were dropped. 1999 saw a further change with an abstract appearing at the beginning of each paper (and a year later the translated abstracts were withdrawn). In this compilation covering the 1967-1996 period, to maintain a consistent approach use has been made of the Contents Page abstract until its demise in 1990 and then for the period 1990 to 1996, the substantive abstracts were rewritten in shortened form.

All papers having a published abstract in JTEP during the period in question, including those commenting on earlier papers, have been included, with few exceptions. These exceptions are papers that, to varying degrees, reviewed the past contents of JTEP. Volume XXIII, no.1 celebrated JTEP’s first 21 years and two papers, one by Michael Thomson (a founding editor), and the other by the late Michael Beesley (a former editor) reviewed the contents of JTEP over the period. Michael Thomson’s paper recalled the factors leading to the foundation of JTEP, considered its achievements, and summarised papers published between 1982 and 1987, by their geographical origin, the industry sectors covered, and by their economic subject matter. Michael Beesley’s paper, which contrasted what should concern economists when they apply their skills to transport issues with what did concern them, analysed JTEP’s contents over the period 1967-87 inclusive. Readers might find these two papers usefully complement the material in this classification.

The classification system used in these two papers is similar to that used here, but there is a major difference of approach. Beesley’s analysis placed each paper into a singular category while Thomson’s placed each into one industry class and one economic class. In contrast, the approach in this compilation typically places the abstract of a paper into several classes, thereby attempting to encapsulate all the dominant themes in a particular paper. This approach can produce numbers in each class significantly different from those derived by Thomson and Beesley. For example, Thomson records two papers on the value of travel time published during the 1982-87 period, whilst the following contains five papers on this subject during the same period.

One feature that does emerge from a review of transport themes is the eclectic character of JTEP. All modes of transport have been represented throughout the first 30 years including a relatively large number on shipping and an even larger number on aviation; these papers having appeared consistently throughout the period.

Surface transport, as one would expect, dominates. In turn, papers on bus transit dominate the papers on surface passenger transport (about twice the number of those concerned with car ownership and use). Papers on rail passenger transport are similar in number to those on the car, but an interesting feature of the former is their anglo-centric nature. There are very few papers on passenger railways in Europe, Asia and other parts of the world, where rail passenger transport is important. Rail freight, in contrast, is represented by a set of papers diverse both in subject matter (costs, pricing, deficit financing) and country focus (US, Australia, Brazil, Canada, Ireland as well as the UK). But the modest number of papers on road freight emphasise the US trucking industry.

Papers on transport infrastructure exhibit one or two features worthy of note. First, there are hardly any on rail track, per se, which is perhaps to be expected given that, until recently, nearly all rail transport management was vertically integrated. Other infrastructures (highways, airports and ports) featured rather more during the first half of the first 30 years; there were hardly any papers on highways or airports during the 1980’s and there has been only one paper on ports since 1984.

Papers on policy themes illustrate a trend away from general transport planning matters (a concern of the 1960’s and 1970’s), towards the singular issues of energy use, emissions and transport safety (although this partly reflects a later emphasis on special issues of JTEP). traffic congestion (including congestion tolling) has produced a steady stream of papers throughout the period but there have been relatively few general papers on transport policy.

Analysis of papers by economic subject matter points to a number of interesting features. Papers concerned with the evaluation of infrastructure during the 1960’s and 1970’s emphasised cost benefit analysis and related matters and then, after a period of neglect, focused on second-best issues. Most of the evaluation papers were concerned with highways, with very little since the 1970’s on either airports or ports. Papers examining economies of scale and scope in the transport industries have ranged widely across the various modes but there has been very little on scale issues in relation to infrastructure: the frequent assertion that transport infrastructure wes characterised by pronounced economies of scale was rarely subject to scrutiny during the first 30 years. Also neglected were pricing issues; of the forty papers on airports and seaports, only half a dozen considered pricing matters.

A number of themes emerge strongly in the last decade reviewed (1987-1996). The measurement of productivity in the transport industries is one. Competition is another: of the two dozen papers concerned with this subject, virtually all have appeared since the mid 1980’s (with a 1974 paper applying oligopoly theory to the airline industry being a notable exception). There were few papers prior to the 1980’s on the (de)regulation theme and these were usually applied to aviation or the taxi industry. Since then, the bus transit industry (particularly in the UK) has featured frequently in papers on deregulation (as well as on competition).

It would be unwise to read too much into these trends reflecting, as they do, the interplay of a number of factors. Although JTEP has benefited from a relatively stable editorship, the first thirty years saw three different groups of editors and this will have had some influence (albeit small) on the choice of content. In addition, there has been the growth of competing journals including specialist journals on aviation, shipping and transport policy, and these may possibly have influenced JTEP’s content. We should also note that Michael Beesley in his review, referred to above, concluded that there was some divergence between the incentives placed on academics seeking career advancement through publication and the requirements of decision makers working in the field of transport policy. The very few papers on airport pricing during the first thirty years of JTEP in spite of airport congestion being a major issue in world aviation, is possibly indicative of this.